My sweetheart and I have joined forces in repurposedKATE’s retail adventure on Etsy.com. If you want to find item listings for pieces we’ve co-created, search for “Verb.Memo.Love.” in Etsy’s search field. We’ve just posted our first collaboration, so give the Etsy engine a few minutes to get it indexed before you try the search.

Of course, if you’re a pinner, we would love to find our creations on your boards… 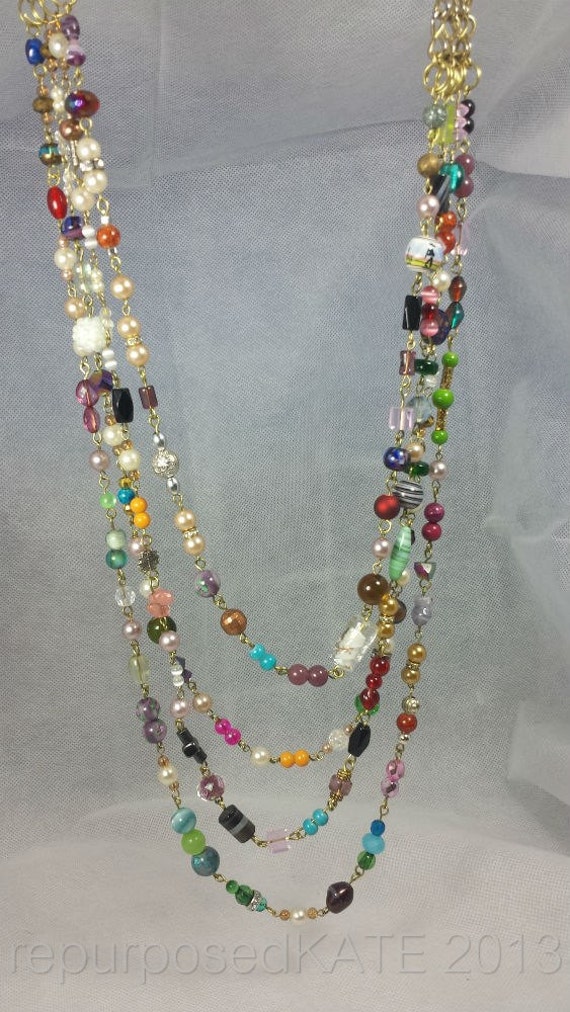 Part “Bohemian.” Part “High Fashion.” Part “Upcycled Fashion.” My Bead Soup necklace is a stunning piece that is sure to attract many compliments and envy.

I’ve been away from the blog and from the studio for a while now, but I’m making a comeback! I’m thrilled to announce the debut of the first of several new pieces ready to list in my Etsy store. Please take a look at these handmade earrings and let me know what you think of them. 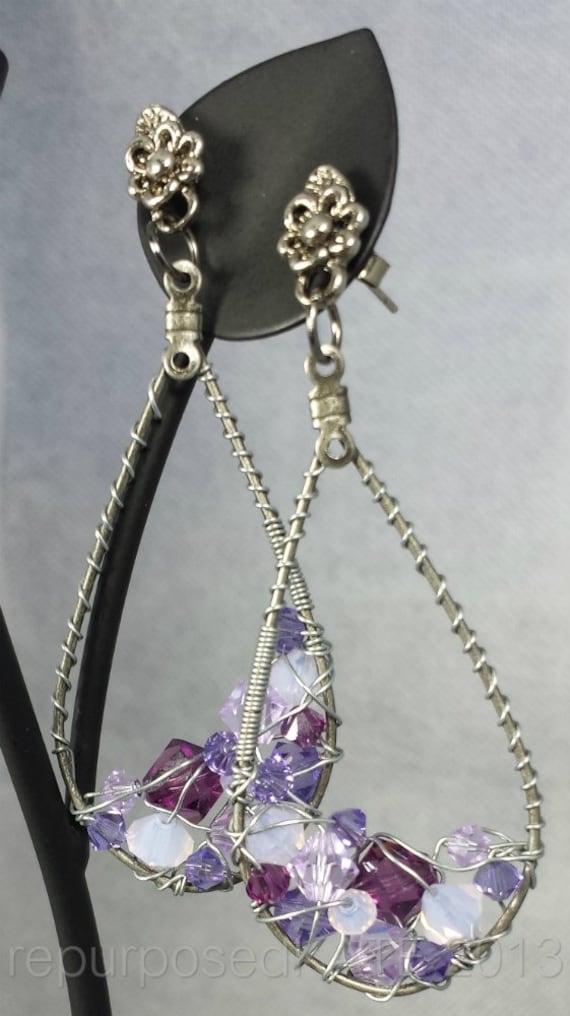 Here I am, early on a Monday morning with nothing to show of in a 4Day Declutter Challenge Reveal post.

Why not? Because I didn’t post a challenge on Thursday.

I am frustrated with myself that I’ve missed posting each of the past two weeks’ challenges and (by no coincidence) each of the past two weeks’ reveals. I’m frustrated AND beginning to feel slightly over-run with guilt for not getting the challenges posted. Extra specially frustrated today because yesterday I made major progress in the front office of the warehouse. The room which has been, in my opinion, the least inviting area of my cluttered existence has been transformed into the closest thing to “homey” in only a few hours’ work.

I should have taken photos of the before.

I just got a wild hair to have the unused refrigerator moved out of the corner and into the shop and started making that happen. Once that beast was out of the room, I set myself to moving the hall tree which has been sitting in the most tempting spot for clutter-collection (directly beside the entry door) into the spot vacated by the fridge. Now the black bench with over-head cubbies sits about 5 feet from the door. Close enough to be a handy launch pad for things like keys and sunglasses, purses and other travel must-haves, but not as convenient for depositing “whatever” we happen to carry in from the truck while being greeted by frantically enthusiastic chihuahuas whenever we come home. Clearing off the bench top has made a nice home (for now) for the duct-tape body form in my image that My Sweetheart helped me to create a couple of weeks ago as well as a home for the oscillating fan which normally takes up an obscene amount of floor-space and is mandatory equipment for My hot-in-every-way Sweetheart’s comfort. I hope that having those two items occupy the area most likely to encourage clutter on this particular piece of furniture we will be able to break the habit of dumping on it. Keep your fingers crossed that it works.

Still motivated to create change in this entry room, I took a pair of scissors to the carpet remnant My Sweetheart had positioned to run the length of the room, folded over at one end to fit the space, and I cut it down to size. The remnant’s remnant I placed in front of the front door. The comfy club chair which had been a sore thumb stuck out in the middle of the room and an obstacle to all movement within the room found a cozy little spot between the newly placed entry rug and the hall tree. My Sweetheart managed to sneak in behind me with a small tea-cart he just bought from the online auction for the whopping price of about a dollar, and he placed the cart between the club chair an the front door. It’s a really cute little cart and it’s a perfect fit in the space, but I’m worried that it may become the new drop-spot for “whatever” as we come in from where ever it is we go loaded down with random stuff. I’ll have to keep an eye on that. Cross more fingers.

The greatest assistance I encountered as I worked my way around the room, decluttering came from two other amazing online auction finds My Sweetheart has adopted in the past week: a small tower cabinet with about eight shallow drawers and a longish leather ottoman/bench/storage box. Into the cabinet went pens, pencils, sketchbooks and nail polishes, in other words, my personal clutter. Into the ottoman went beads and other crafting supplies, shoe-shine products and the like. It’s embarrassing how much clutter I create around here. I’m happy to have these two tools for hiding my mess! (Thanks, Babe.)

The greatest help I got with the cleaning aspect came from a new (to me, anyway) Kirby vacuum cleaner that My Sweetheart acquired for me on Saturday. I gotta hand it to The Kirby Company, they do make a product that sucks, but in such a great way! Every home should have a Kirby and that’s about all I’ve got to say about that.

I didn’t get the whole room completely and totally decluttered by the time I threw in the towel, but I did get the major points covered… er… uncovered… before I sat down. Even the stack of boxes I have spent every day we’ve lived here trying to convince myself aren’t there really aren’t there! The best thing, though, is that when I finally called it quits, My Sweetheart came right behind me to place a new (from an online auction) open-faced, little cabinet in the corner where those boxes had been and topped it with what looked at first to be a sparkly, new microwave. On closer inspection, I realized that it was the same appliance we’ve been using (and neglecting) for over a year. My Sweetheart had polished it to a like-new shine.

All-in-all, I’m darn pleased with the results of the effort we put into it. I’m way less self-conscious about opening the door when there’s a knock from the other side. That says something, but doesn’t quantify the weight that’s been lifted from my shoulders. Whew!

But even in spite of all the progress I’ve made over the weekend, clutter-busting “to beat the band” as my grandmother might have said, I’m still aggravated with myself over the recent non-success of the 4Day Challenge. Not only am I frustrated at the fact that I’ve not posted the challenge or the reveal in the past two weeks, I’m also annoyed with myself that the only thing I’ve really posted, despite the fact that I’ve missed the challenge has been about it or somehow related to it, rather than whatever it might have been that inspired me to post in the first place, because I feel obligated to say something about the missed post… UGH! Since I’ve been the only participant lately, I’m not getting that team-spirit feeling out of it, either. But even with all of these not-quite-loving feelings I’m experiencing over this weekly meme concept, I would still be committed to sticking with it, just to keep myself motivated to kicking clutter in the butt. My progress in the front room this weekend, without the 4Day Challenge to hold me accountable, has given me a different outlook on the future of the challenge… Which brings me to the real reason for this post…

I’m suspending the 4Day Declutter Challenge… indefinitely. When the time comes that I need an external motivation for keeping up progress, I’ll bring it back. Unfortunately, I’m sure it will be back before long. What a sad truth. But it’s a relief to feel the freedom to post about whatever’s on my heart or my head when I want to post. I feel the freedom already! In fact, I’ve got a new pet-project that My Sweetheart and I are developing and fine-tuning; we even gave the idea a test-run over the weekend and I can hardly wait to tell you all about it.

I hope you all aren’t too disappointed in me for pulling the plug on the challenge, but I hope you’ll tell me about it, either way, in the comments.

A week and a half ago, when I posted my challenge for week number five, one of my favorite people in the entire world wide web chimed in with this comment. Another of my favorite people on the whole internet agreed with her. I’m pretty sure that I actually felt each of them cringing on my behalf, one of them half way across town from me, the other all the way across the country. I could almost hear them asking themselves WHY is she doing this to herself? That’s too much in too little time. What is she thinking?! And I can’t blame them for thinking that, but it was too late to change my challenge for the week, so I just did what I could do and that was that.

When the next Thursday rolled around, with the comments from the previous week still fresh on my mind, what did I do? You guessed it! I did exactly what I always do… I posted a big challenge! Admittedly, this week’s challenge wasn’t as big as some that have come before, but it wasn’t exactly a piece of cake, either. There is one thing about this week’s de-clutter zone that stands out from one or two that I’ve posted in the past: I DID IT!

That’s right! Under the strict supervision of Peanut and Oogie-boogie, I completed the 4-Day DeClutter Challenge for week number six! And I didn’t even get any assistance with it.

Wanna see it?  No problem!

Where did that case of sodas come from?

I know just one photo isn’t very impressive, but it’s a little room. I think the single shot just about says it all. I would like to add that what it doesn’t say is that my sweetheart managed to scoot in to restock the little beverage refrigerator that sits just across the doorway from Oogie. I don’t know how I managed to not see that when I snapped the photo. As for the spray bottles… I had almost taken this shot to post as a progress pic, but with the words of my blog-buddies on my mind and new jewelry designs on my workstation, I decided to just finish up by putting away the cleaning supplies and officially declaring this week’s challenge a decluttering success!

Special thanks to my blog-buddies for their realistic support week in and week out. Special thanks to another of my favorite people in cyber-space for reminding me to never back down. Without a support system like mine I wouldn’t be out here posting this silly (and apparently solo) meme week after week. Thank you, buddies!

What about you? Yes, you! What are you decluttering in your world? I would love to show it off for you! Find out how the 4-Day DeClutter Challenge works and stop in on Thursday to share your own challenge!